Solarban®, Starphire® glasses integral to one of world’s “most stunning” libraries 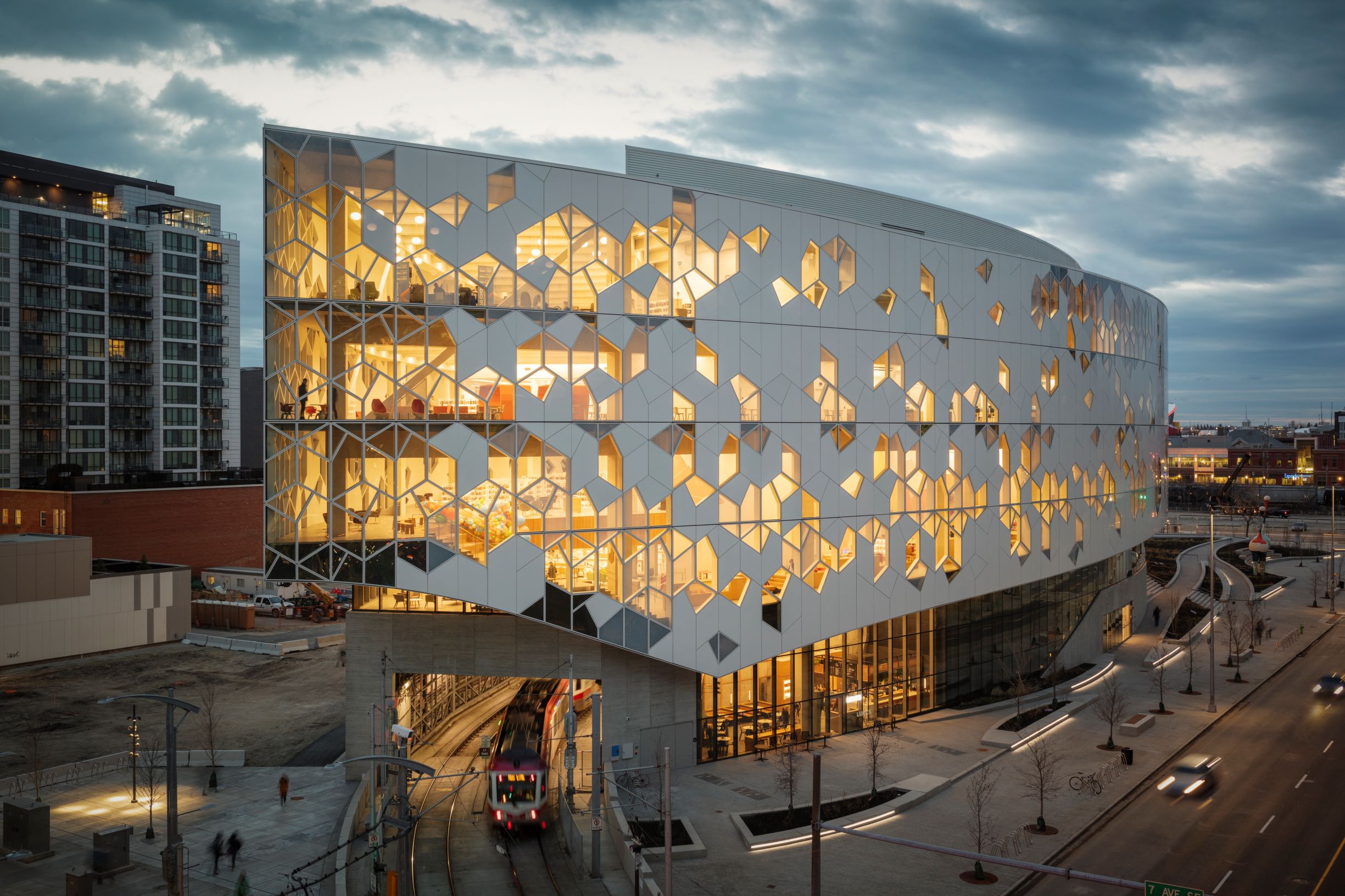 PITTSBURGH, October 29, 2020 – Calgary Central Library in Alberta, Canada opened as one of Architectural Digest’s most anticipated buildings of 2018. Since then, it has earned multiple awards for its beauty as well as its brains, thanks in large part to an extraordinary glass-and-metal façade featuring Solarban® 60, Solarban® 72 and Starphire Ultra-Clear® glasses by Vitro Architectural Glass.

The library’s curved exterior surface is outfitted with a hexagonal pattern of alternating clear, glazed and ceramic-fritted glass and iridescent aluminum panels, which has led to the building being variously described as resembling an open book, snowflakes, snowdrifts or ice cracking on a lake. However, the design also has a functional purpose: to diffuse light inside the building while preserving views outside.

“The design process focused on providing a variety of conditions for people to enjoy in each space, the goal being that users can choose whether to sit in the sun or shade,” explained project architect Dennis Rijkhoff of Snøhetta in Oslo, Norway.

After studying how daylighting and views affected interior spaces and the overall composition of the façade, the architect settled on a mix of 60% insulating metal panels and 40% triple-pane insulating glass units (IGUs). Oldcastle Building Envelope (OCBE), a member of the Vitro Certified™ Network, fabricated three different types of triple-pane IGUs for the project, each featuring a single lite of Starphire Ultra-Clear® glass sandwiched between individual panes of Solarban® 72 and Solarban® 60 glasses.

The finished IGUs were then supplied to Ferguson Corporation, which fabricated 462 uniquely shaped unitized panels that were painted in three different colors for various interior and exterior surfaces and infilled with clear, glazed or fritted IGUs. The panels, which took eight months to fabricate, were placed randomly around the building to create a consistent aesthetic and to enable each side to function as its front.

Since its opening, Calgary Central Library has earned numerous accolades for its design, including the 2020 AIA Architecture Award and the national 2019 AIA/ALA Library Building Award, granted by the American Institute of Architects (AIA) and the American Library Association (ALA). It also topped Popular Mechanics’ list of the world’s most stunning libraries earlier this year.

Most importantly, the building is fulfilling its mission to serve as an open and welcoming learning and community center, attracting nearly 1.75 million visitors in its first full year of operation.

Solarban® and Starphire Ultra-Clear® are registered trademarks owned by Vitro.